David W. Frame is a proud native of Clarksburg, West Virginia. The oldest of seven (7) children, he grew up in Clarksburg and received his early education in Harrison County public schools, graduating from Washing Irving High School in 1973. He spent his freshman year at West Virginia University, majoring in music, proudly playing in the Mountaineer Marching Band and touring with a popular dance band, The Porte Authority. David then put his studies on hold for two (2) years to fulfill a mission for The Church of Jesus Christ of Latter-day Saints, serving throughout Queensland, in the Brisbane Australia Mission. After returning to the United States, he completed a Bachelor of Science degree at Brigham Young University, majoring in Political Science and English. He came home again in 1980 to the WVU College of Law, and graduated in 1983. While he was at the WVU College of Law, David served as a student editor of the West Virginia Law Review, authored several articles, and he won honors in the annual moot court competition. As a law student, he worked as a law clerk for the principal attorneys at the prestigious local law firm of West & Jones, and was hired as an associate lawyer after graduation. In 1985, David opened his own private law office. In the thirty-five (35) years that have passed since that time, David W. Frame has practiced law in his current office location, across the street from St. Marys Square, where he was born. He has handled thousands of cases involving personal injury, general civil litigation and criminal defense in both the state and federal courts. He has personally handled more than 75 cases all the way to a final jury verdict in the United States District Court for the Northern District of West Virginia, and in the state circuit courts in Harrison, Marion, Monongalia, Wetzel, Taylor, Upshur, Randolph, Lewis, Gilmer, Braxton and Kanawah Counties. David has also handled several notable appeals to the West Virginia Supreme Court of Appeals, the federal Fourth Circuit Court of Appeals and the United States Supreme Court of Appeals. He has consistently attained favorable outcomes for his clients, including final judgments and settlements involving monetary compensation of more than a million dollars.

David was appointed by the governor to serve on West Virginia’s Lawyer Disciplinary Board, a position which hears ethics complaints filed against West Virginia lawyers and issues recommendations to the West Virginia Supreme Court regarding licensure and disciplinary action. He has served on the board of directors of a local non-profit charitable organization that provides services and outreach to the homeless in Harrison County. He has always been active in church, family and community affairs. He has continued his amateur musical career, playing in the orchestra for several high school plays. He is currently playing drums for a 15 piece Big Band jazz ensemble.

On a personal note, David married Robin Young, of Fairmont, West Virginia, in 1988. In 2017, after 30 years together, he lost Robin to metastatic breast cancer. He is a fierce advocate for breast cancer awareness. He proudly supports his children, who live in Clarksburg and Washington, D.C., pursuing their own adventures in life. He loves every moment in the company of his grandchildren, who are equally gifted and good. He is an avid outdoorsman: hiker, biker, runner, climber, backpacker, skier, fisher. Just give him an excuse to get outdoors and he will go. He reads voraciously, thinks deeply, laughs a lot, cherishes his friends, family — and clients — and feels like the most fortunate of men. 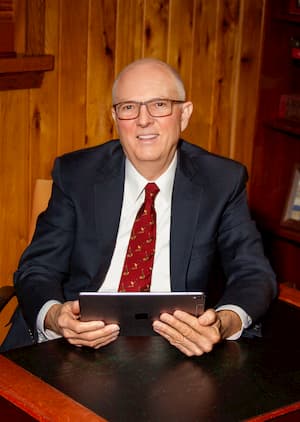 He is one of the kindest, caring, professional lawyers I have ever met. He is just a good person. He is the first lawyer I have ever believed in and trusted. He help my husband and I so much. Hes very smart and he knows how to fight in the court. I truly would recommend him before anyone else. We are so grateful he was recommended to us and he took our case at the worst time of our lives.

Mr. Frame is a sterling example of a great human being. I reached out to him during a very sad and tumultuous time in my and my family’s lives, and he directed us to people who, along with him, would save a legacy of hard work. He works with an air of kindness and humbleness and is never stuffy or condescending. He truly cares about his clients and has such a calming demeanor, I highly recommend his work as an attorney!